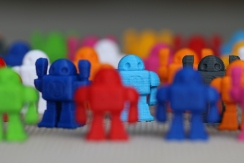 Playing with depth of focus 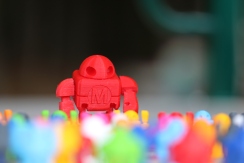 Wow, thats a lot of little maker faire robots. Why are they running away?

Yeah, lots of nGen color samples. I use this model as a sample print to have a record of each color I have.

Stand out from the crowd

Run! A giant is coming for us…

Apparently I’ve been building a robot army. Some models really do seem to get stuck in your head or on your printer bed. These tiny Maker Faire Robots are models I use to print samples of various filament colors. Like so many other models lately it was not good enough to make one for my maker bench, I needed to make one each of the robot with his arms up and one with his arms down. But that still wasn’t enough, I also wanted a set for the office at work. I wound up printing 4 robots, two of each style each time I got a new spool of nGen filament. 32 robots later and 1 of the larger articulated versions I thought it was time to take some photos of the brigade.

I recently picked up a dedicated macro lens and had some fun playing with depth of focus in the above shots.

If you’d like to print some for yourself you can find the models here:
Small Maker Faire Robots